European Commission with a diplomatic status has been providing development aid to Nepal since 1992. EU unites 27 European countries and has successfully ensured lasting peace, stability and economic prosperity within Europe.  EU today is the big provider of grant aid in Nepal.

The principles that inspired EU’s own creation, development and enlargement are: democracy, the rule of law, the universality and indivisibility of human rights and fundamental freedoms, respect for human dignity, the principles of equality and solidarity, and respect for the principles of the United Nations Charter and international law; and are seen as an integral part of the European way of life.

As per the Multiannual financing Framework 2021-2027, the planned expenditure of EU over the said period is estimated to be Euro 1824.3 billion. The preliminary data shows that the EU institutions provided USD 19.4 billion in ODA during 2020.

The European Commission, which has been present in Nepal since 1992 for technical cooperation, was upgraded in 2002 to a delegation with a diplomatic status similar to that of other diplomatic missions in Nepal. It underwent a name change and became the Delegation of the European Union to Nepal after the formation of European External Action Service on 26 July 2010. The EU Delegation does not deal with tasks of a consular nature, which are dealt with by the EU Member State Embassies in Nepal, and instead functions as an official channel of bilateral relations, be it political, development, economic or cultural. The Nepal Delegation is a fully-fledged diplomatic mission and officially represents the EU in Nepal.

The EU’s assistance to Nepal is given in the form of project grants, service contracts and budget support. The largest area of support of the EU has been its budget support to the Education sector.EU continues to support the school sector through budget support to the School Sector Development Plan (SSDP). The total amount allocated for 2014-2020 is 61.4 million Euros.

The EU also supports Technical Education and Vocational Training with an allocation of 20 million Euros. The EU-TVET Program invests in human capital by creating better employment opportunities. Its specific objectives are to strengthen and implement more effectively a TVET policy responsive to labour market needs.

The followings are the top five sectors of EU support during the last five year period in Nepal: 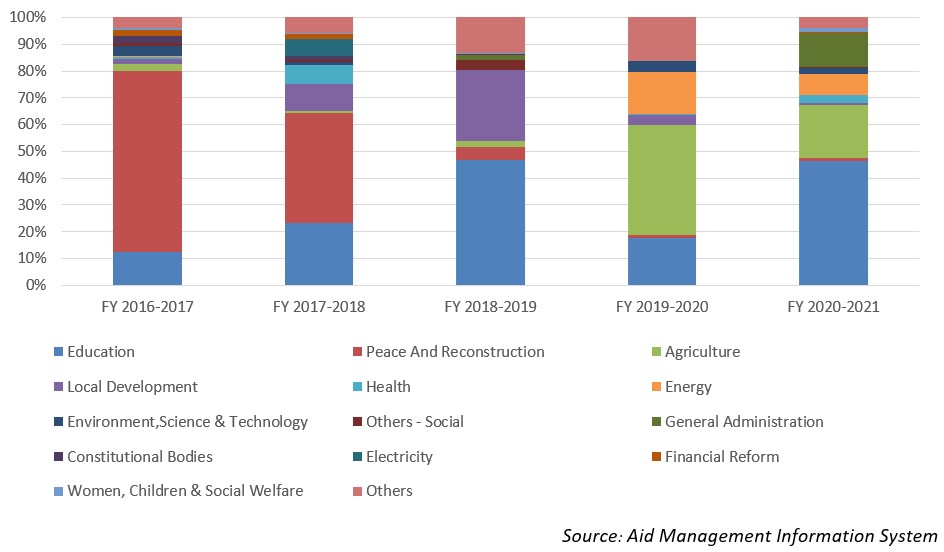 During the said five-year period, EU has committed to provide an assistance of US $ 425.9 million to Nepal through separate agreements. The highest level of commitment of aid was made of US $ 171.1 million in fiscal year 2017/18.

In an effort to support Nepal, and as set out in the Multiannual Indicative Programme (MIP) 2014-2020, the EU has chosen, together with the Government of Nepal, to focus its activities on three major focal areas: (1) sustainable rural development; (2) education; and (3) strengthening democracy and decentralization.

Following the 2015 earthquakes, reconstruction also became an important focus of EU assistance to Nepal. The financial envelope for this period was 360 million Euro, which is the triple of the previous period’s financial envelope.

In the area of sustainable rural development, the EU is providing support to the National Multi-Sector Nutrition Plan (MSNP) with an envelope of 22.65 million Euros, jointly with UNICEF.