Nepal - SDF cooperation is based broadly on SAARC’s overall development strategy. SDF was established in 2008 aiming at alleviating poverty and promoting the welfare of the people of the SAARC region. SDF has concentrated in areas of women, children and social welfare, agriculture and health sectors in Nepal.

The Governing Council is the apex policy making and management body of the SDF. The Member States are represented in the Governing Council by their respective Honorable Finance Ministers. The GC meets once a year for operational matters. The Fund is guided by a Board of Directors which comprises eight representatives from the Ministries of Finance of the respective Member States.

SDF is an umbrella financial institution for SAARC projects and programs which are in fulfillment of the objectives of the SAARC Charter. SDF has three funding windows: Social, Economic and Infrastructure Windows. Infrastructure Window is mainly used to fund projects in areas of energy, power, transportation, telecommunications, environment, tourism and other infrastructure areas.

As of July 2020 there are 12 un-going projects under social window. Currently SDF’s Fund commitment under Social Window totals around US $ 90.02 million, of which around US $ 48.86 million has already been disbursed. The fund (loan) commitments under Economic and Infrastructure Windows total to an amount of around US $73 million. The 33rd Meeting (virtual, 28-29 July 2020), of SDF Board, approved US $ 7.7 million for seven COVID-19 projects of the Seven Member States, to respond to the COVID-19 pandemic.

Nepal has been a member of SDF since its establishment and has a representative on the SDF Board. The development cooperation between Nepal and SDF is based broadly on SAARC’s overall strategy with its member nations because SDF is a fund under the SAARC mechanism. SDF mainly focuses on the welfare of the people of Nepal as a country in the SAARC region so that their quality of life can be improved.

The current projects under implementation through SDF support in Nepal include Networking and Capacity Building of Women Entrepreneurs (SMEs) from SAARC Countries; Bamboo Based Enterprise Development; and SAARC Regional Inter-Professional Master’s Program in Rehabilitation Science.

The following 4 sectors are the major support sectors of SDF: 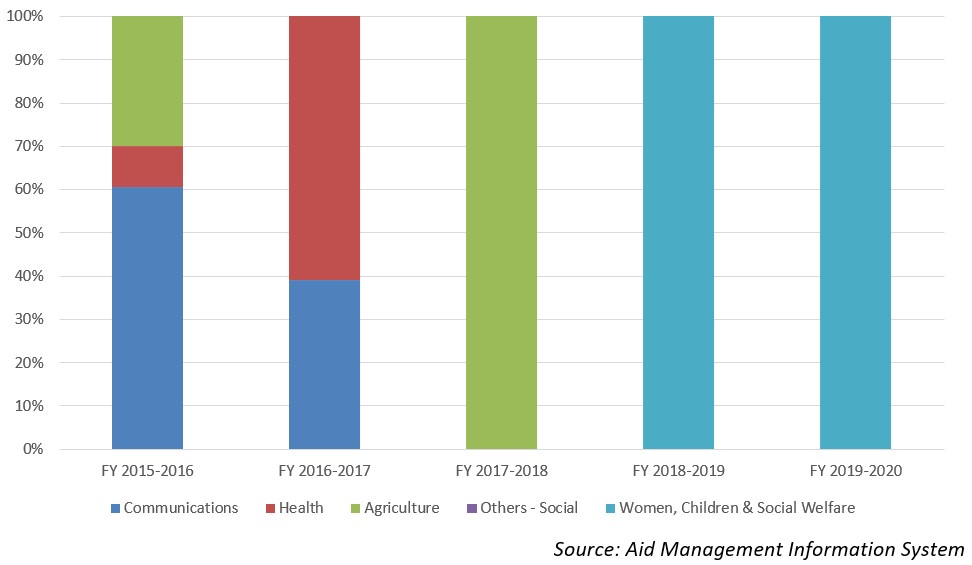 The partnership strategies of SDF are aimed to identify, study prospects and approve projects; leverage funding i.e. arranging and mobilizing financing and/or co-financing for projects; provide grants for projects of strategic importance to SAARC, provide financial and technical assistance, and manage the fund.

The 13 stated areas of cooperation are as follows: agriculture, education, culture and sports, health, population, child welfare, the environment and meteorology, rural development (including the SAARC Youth Volunteers Program), tourism, transport, science and technology, and communications. Nepal is implementing several projects under SDF.

[1] SAARC (South Asian Association for Regional Cooperation) is a regional intergovernmental organization and geopolitical union of nations in South Asia founded in Dhaka on 8 December 1985.