IFC was founded in 1956 to lend to private companies and financial institutions in developing countries. IDA was established in 1960 to complement the existing IBRD by lending to developing countries which suffer from the lowest gross national income or from the lowest per capita income. ICSID was established in 1965 for legal dispute resolution and conciliation between international investors, and MIGA was founded in 1988 to offer political risk insurance and credit enhancement guarantees.

The headquarters of the Bank is in Washington, DC. The World Bank Group works in more than 130 locations across six regions - Africa, East Asia and Pacific, Europe and Central Asia, Latin America and the Caribbean, the Middle East and North Africa, and South Asia. The World Bank Group is one of the world’s largest sources of financial and technical assistance to developing countries around the world. It provides low-interest loans, zero to low-interest credits, and grants to developing countries.

These support a wide array of investments to a range of sectors and projects. Some of the projects are co-financed with governments, other multilateral institutions, commercial banks, export credit agencies, and private sector investors. The World Bank Group works with country governments, the private sector, civil society organizations, regional development banks, think tanks, and other international institutions on issues ranging from climate change, conflict, and food security to education, agriculture, finance and trade.

The World Bank Group has set two goals for the world to achieve by 2030: reducing extreme poverty to 3%, and promoting shared prosperity by increasing the incomes of the poorest 40% of people in every country. All support to a member country is guided by a single strategy that the country itself designs with support from the World Bank and others development partners.

The World Bank made four loans totaling US$ 497 million in 1947; In fiscal 2021, the number of countries eligible for IDA assistance are 74. New IDA lending commitments amounted to US $36.0 billion for 297 operations, of which seven were IBRD and IDA blended operations in this year. These commitments included $23.9 billion in credits and $12.1 billion in grants. The total disbursement during 2021 is estimated to be US $ 12.9 billion.

The two institutions, the World Bank and IFC, coordinate closely in the energy and financial sectors. In addition to the Systematic Country Diagnostic (SCD), multiple joint analytical works are underway. These include the Country Private Sector Diagnostic (CPSD) and the Infrastructure Sector Assessment Program (InfraSAP). IFC investment is being continued since 1956. BY June 2020, IFC’s committed portfolio is more than US$ 484 million. In 2020, IFC has financed in the 216 MW Upper Trishuli-1 Hydropower project.

Nepal is eligible for concessional financing support from the IDA. During the IDA17 period (17th replenishment (2015-2017), the World Bank committed US$ 1.2 billion. This amount included additional financing of US$ 300 million from the IDA Crisis Response Window to respond to the emergency needs after the 2015 earthquake. During the IDA18 period (FYs 2018-2020), Nepal had access to approximately US$ 1.3 billion in IDA financing.

As of December 2021 the World Bank portfolio in Nepal comprised of 43 active projects. Across its projects, the World Bank considers gender, citizen engagement and climate change as cross cutting issues. In addition to own sources, the World Bank also administered a multi-donor trust fund that pools resources from Japan, European Union, Canada, the UK’s Department for International Development (DFID), Switzerland, and USAID.

The followings are the five top focused sectors of the World Bank group during the last five year period: 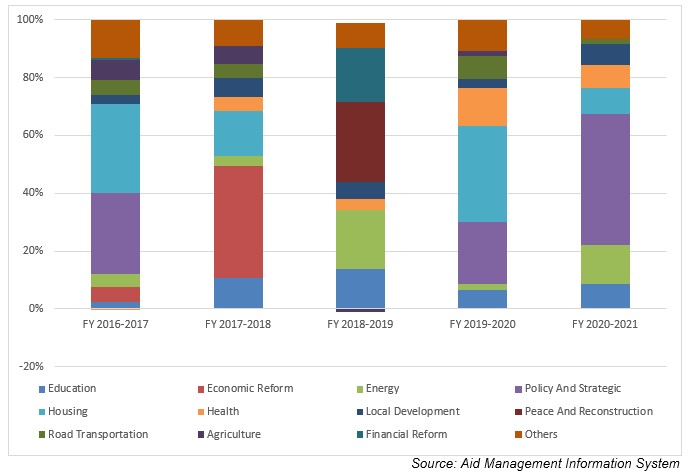 The following are the top five largest projects of the World Bank Group support in terms of volume of financing:

The World Bank Group has agreed to provide financial support of US $ 4247.5 million in the last five-year period through different agreement with the government of Nepal. The highest level of annual aid commitment was made of US $ 1270. 4 million in 2020/21 whereas the lowest level of such commitment took place in fiscal year 2018/19 at a level of US $ 629.6 million.

The World Bank and Nepal agreed on a Country Partnership Framework (CPF) covering the five-year period of FY2019-2023 in 2018. The SCD carried by the World Bank suggested that strengthening public institutions is the top priority, followed by private sector investment, human capital development, natural resources management, strengthened resilience and unlocking the benefits of migration. Based on the stated SCD and nations development agenda the CPF has focused on three transformative engagement areas: (i) public institutions, (ii) private-sector led jobs and growth, and (iii) inclusion and resilience.

In line with the CPF, IFC’s program in Nepal is addressing the key development gaps and creating markets by focusing on financial inclusion, sustainable infrastructure, including power and connectivity, and sectors that contribute to growth, increased competitiveness and better employment opportunities.

-   The World Bank in Nepal: http://www.worldbank.org/en/country/nepal