Nepal became a member of The International Fund for Agricultural Development in 1977. IFAD works in the most remote regions of developing countries where poverty and hunger are deepest. Nepal country strategic plan (2019–2023) of IFAD reflects the zero hunger strategic review to achieve zero hunger by 2030.

The International Fund for Agricultural Development (IFAD), a specialized agency of the United Nations, was established as an international financial institution in 1977 as one of the major outcomes of the 1974 World Food Conference. The conference was organized in response to the food crises of the early 1970’s that primarily affected the Sahelian countries of Africa.

The governance structure of IFAD is led by the Governing Council, its highest decision-making authority. Each Member State is represented in the Governing Council by Governors, Alternate Governors and any other designated advisers. The Executive Board is responsible for overseeing the general operations of IFAD and for approving its program of work.

IFAD’s Highly concessional loans carry no interest charge, have a service charge of 0.75% and are repaid over 40 years. Loans on hardened terms have the same interest and service terms, but are repaid over 20 years. IFAD is a financial institution, and this distinguishes it from its partner food and agriculture organizations, Food and Agricultural Organization (FAO) and WFP (World Food Programme).

Nepal became a member of IFAD on 13 December 1977. Nepal’s membership was ratified by the Governing Council on 5 May 1978, making Nepal among the first countries to benefit from IFAD funds.

IFAD’s investments reinforce the issues of poverty, inequality and social marginalization that have been at the heart of conflict in the country. Since 1977, IFAD has provided with low-interest (highly concessional) loans and grants for different socio-economic projects, directly benefitting rural households. In addition, IFAD also provides a range of regional grants, technical support and assistance across the region.

The five major sectors of IFAD support during the last  five-year period: 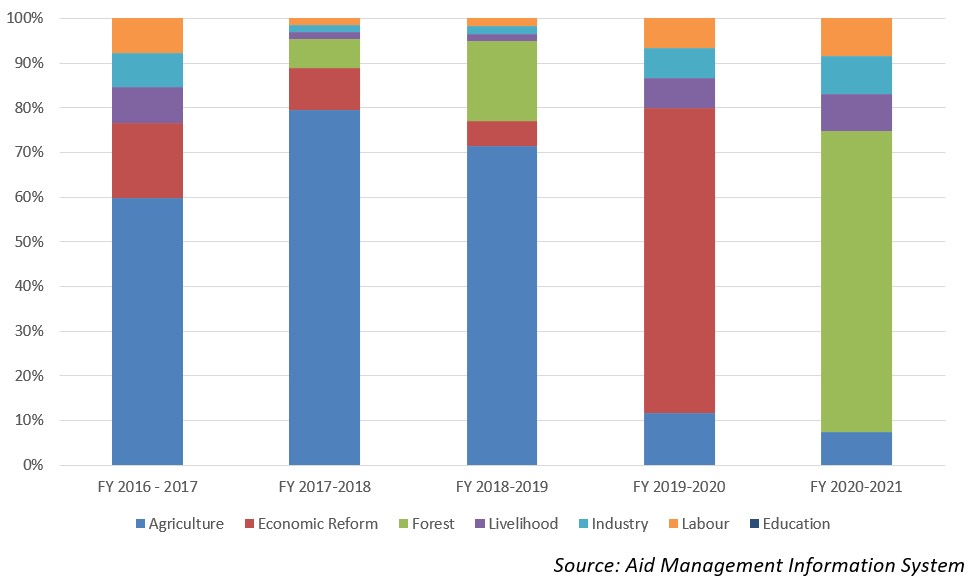 In the last five year IFAD was committed to provide Nepal a sum of US $ 44.8 million to c carry out different socio-economic development projects. However, IFAD did not entered into any agreement financial support with the government during fiscal year 2016/17, 2018/19 and fiscal year 2019/20.

Nepal country strategic plan (2019–2023) was approved with the total WFP cost of US $ 126 million. The plan reflects the zero hunger strategic review recommendations to achieve zero hunger by 2030. It is designed to align with the new federal structure and the constitutional right to food. The plan has five related strategic outcomes addressing Strategic Development Goals 2 and 17.

The five outcomes are: i) Affected populations will have timely access to adequate food and nutrition ii) People in food deficit targeted areas have improved nutrition throughout the key stages of their lives by 2025. Iii) Poor communities in remote food-insecure areas have improved food security and resilience to climate and other shocks by 2030 iv) Strengthened public sector capabilities to provide essential food security and nutrition by 2023, and v) Achieving zero hunger by 2030.