Development cooperation between Nepal and OFID started from 1976. OFID aims to develop South-South Cooperation and help the poorer, low-income countries in pursuit of their social and economic advancement. Over the last five-year OFID has disbursed US$ 20.85 million for tourism, drinking water, urban development and agriculture projects.

The OPEC Fund for International Development (OFID), an intergovernmental development finance institution was established in January 1976 by the 13 Member Countries of the Organization of the Petroleum Exporting Countries (OPEC) following the decision made at the Conference of Sovereigns and Heads of State of the OPEC Member Countries, held in Algiers, Algeria in March 1975. Initially, it was called the OPEC Special Fund.

It provides grants in support of technical assistance, food aid, research, and humanitarian emergency relief. OFID also serves as an agent of OPEC Member Countries in the international financial arena whenever collective action is deemed appropriate.

OFID is led by its supreme authority, the Ministerial Council, composed of finance ministers of the Member Countries. The Council issues policy guidelines, approves the replenishment of OFID’s resources, authorizes the administration of special funds and makes major policy decisions. It meets once a year.

OFID provides its assistance to all developing countries with the exception of OPEC Member Countries. The least developed countries, however, are accorded higher priority. A total of 134 countries including 53 from Africa, 43 Asia, 31 Latin America and the Caribbean, and 7 Europe have been benefited from OFID’s financial assistance to date.

In 2020 the OPEC fund had committed US $ 1.59 billion.  The Fund has allocated US $ 1 billion to help Covid-19 affected communities across the world and joined in multinational efforts to help developing nations to mitigate the effects of pandemic.

Development cooperation between the Government of Nepal and OFID was initiated following the establishment of the OPEC Fund by the oil-rich countries in 1976. Since then, OFID has been assisting Nepal for development projects, especially in the water and sanitation sector. OFID loans to Nepal bear a 1.5% interest charge and a 1% service charge, but carry no commitment charge.

OFID has made contributions to better the lives of poor people with proper and clean water supply. Indeed, one of OFID’s objectives in Nepal is to support a wide range of operations, ranging from large-scale water storage, treatment and distribution projects to village pumps and school latrines, as well as schemes for the efficient utilization of water in arid regions.

As of December 2021, OFID has approved loans for various sectors in Nepal for a total amount of US$ 313.40 million. The loans include one BOP support loan in the amount of US$ 4.15 million; one program loan worth US$ 5.00 million; and rest project loans. Projects supported by the loans have been mainly in the agriculture, education, telecommunications, transport, water supply and sewerage, energy and infrastructure sectors.

The OPEC Fund for International Development (the OPEC Fund) has signed a US$15 million loan in favor of NMB Bank Limited in Nepal for the purpose of financing micro-, small- and medium-sized enterprises (MSMEs) and renewable energy projects in 2019. The loan represents the OPEC Fund’s first financial institution transaction in the country.

The followings are the major support sectors of OFID: 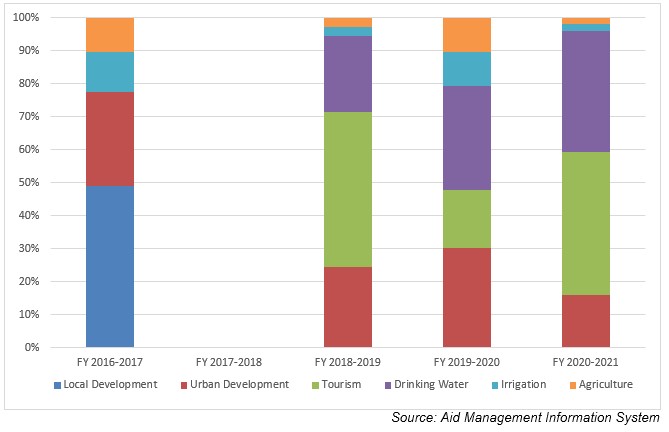 During the last five year period, OFID has agreed to provide US $ 3.2 million through separate agreements concluded with the government of Nepal. The highest level of support agreement was of US $ 3.4 million in fiscal year 2016/17. However, no commitment of support was made during fiscal years 2017/18 and 2020/21.