Nepal and FAO have been cooperating to improve agricultural, forestry and rural development since 1951 when Nepal became a member of FAO. FAO works to defeat hunger in over 130 countries worldwide. It is cooperating to formulate an Agriculture Development Strategy and Food and Nutrition Security Plan for Nepal.

The Food and Agriculture Organization (FAO) is a specialized UN agency established in Quebec City, Canada in 1945. Washington DC was designated as a temporary FAO headquarters, which later shifted to Rome, Italy in 1951. Its major objectives are to achieve food security for all and make sure that people have regular access to enough high-quality food to lead active, healthy lives. FAO works to defeat hunger in over 130 countries worldwide.

As with other UN agencies, FAO is directed by the Conference of Member Nations, which meets every two years to review the work carried out by the organization and to work and budget for the next two-year period. The Conference elects a council of 49 Member States (serving three-year rotating terms) that acts as an interim governing body, and the Director-General, who heads the agency.

Nepal and FAO have been cooperating to improve agricultural, forestry and rural development in the country over the last 64 years. Nepal became a member of FAO on 21 November 1951 and FAO established its Nepal Country Office in 1977. FAO was the first among the different UN agencies to open an office and begin field level work in Nepal.

Since its establishment, FAO in Nepal has made great strides in vital areas of agriculture and rural development by providing advice on policy matters and technical support in relevant sub sectors. Upon the request of the government, FAO mobilizes its own internal resources in the form of Technical Cooperation Programme (TCP) or solicits support for funds from potential donors in the form of Government Cooperation Programme (GCP) or Unilateral Trust Fund (UTF).

FAO works in cooperation with the Government of Nepal and other Development Partners in Nepal. To date, the organization has supported the implementation of over 350 projects in the fields of agriculture, livestock, and forestry development, food security, nutrition, rural income generation, agricultural value chains, and adaptation to the effects of climate change across the country.

In support of post-earthquake recovery, FAO developed the project Emergency Response to Restore the Rural Livelihoods of Earthquake-affected Farmers, and helped around 6,000 households.

FAO support sectors during the last five year are: 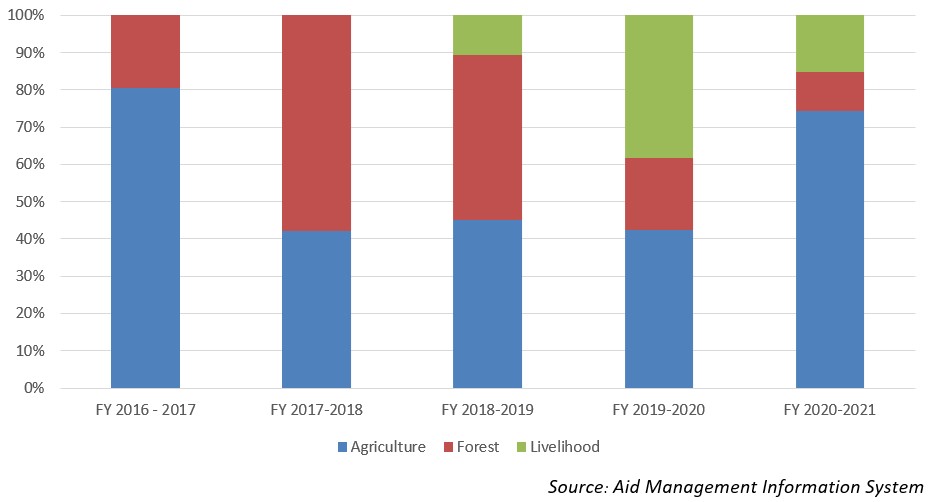 Over the last five-year beginning from FY 2016/17 to 2020/21, FAO has disbursed US$ 3.85 million of ODA to Nepal. The disbursement was the highest annual disbursement standing at US $ 1.53 million in fiscal year 2016/17 whereas it was the lowest amounting to US $ 0.27 million. The average annual disbursement during the said period is US $ 0.77 million.

FAO had agreed to provide US $ 3.87 million during the last fiave-year period through separate agreements. The highest level of commitment of US $ 1.6 million was made in fiscal year 2018/19 whereas the lowest level was US $ 0.13 million in fiscal year 2017/18.

FAO’s assistance in Nepal focuses on four priority areas for technical cooperation: (1) food and nutrition security and safety; (2) institutional and policy support, strengthening analytical and technical capacities from policy and program formulation to implementation and monitoring; (3) market orientation and competitiveness, promoting market-oriented production and value addition through enhanced technical and institutional capacities; and (4) natural resource conservation and use, including adaptation to climate change.

FAO is also collaborating with other Development Partners in supporting the Government of Nepal in formulating an Agriculture Development Strategy and a National Food and Nutrition Security Plan, both of which have a vision for 20 years. In addition, the Country Programming Framework (CPF) 2013-2017 for Nepal outlines the joint GoN and FAO medium‐term priorities for FAO’s technical assistance over the five‐year period.