The UN Women Nepal Country Office was established in 2012. UN Women is mandated to be a lead driver and lead voice advocating for gender equality and women’s empowerment globally. UN Women in Nepal focuses on violence against women, leadership and participation and economic empowerment of women.

The United Nations Entity for Gender Equality and the Empowerment of Women, UN Women is a New York based UN organization established in July 2010 which became operational in January 2011. It works globally to make the vision of the Agenda 2030 and its Sustainable Development Goals (SDGs)[1]a reality for women and girls, standing behind women’s equal participation in all aspects of life.

UN Women is governed by a multi-tiered intergovernmental governance structure in charge of providing normative and operational policy guidance. The organization is led by an Under Secretary-General appointed by the Secretary-General in consultation with Member States, for a term of four years, with the possibility of renewal for one term.

UN Women implements programs in more than 90 countries in the world. Its funding comes from different donors either through governmental, organizational or individual contributions. In 2020, UNWOMEN received a total of US $ 548.6 million. This contribution consists of the contribution from Member States, business partners, philanthropists and individual donors.

The UN Women Nepal Country Office was established in April 2012 in Kathmandu, and received full Delegation of Authority in July 2013. The Country Office’s Strategic Note for 2018-2022 builds on lessons learned from past programming and adopts a holistic and integrated approach across its two thematic priorities, inclusive governance and leadership and women’s economic empowerment. Moreover, the Country Office explicitly pursues the objective of transforming discriminatory social norms and harmful practices.

The followings are the major support sectors of UN Women: 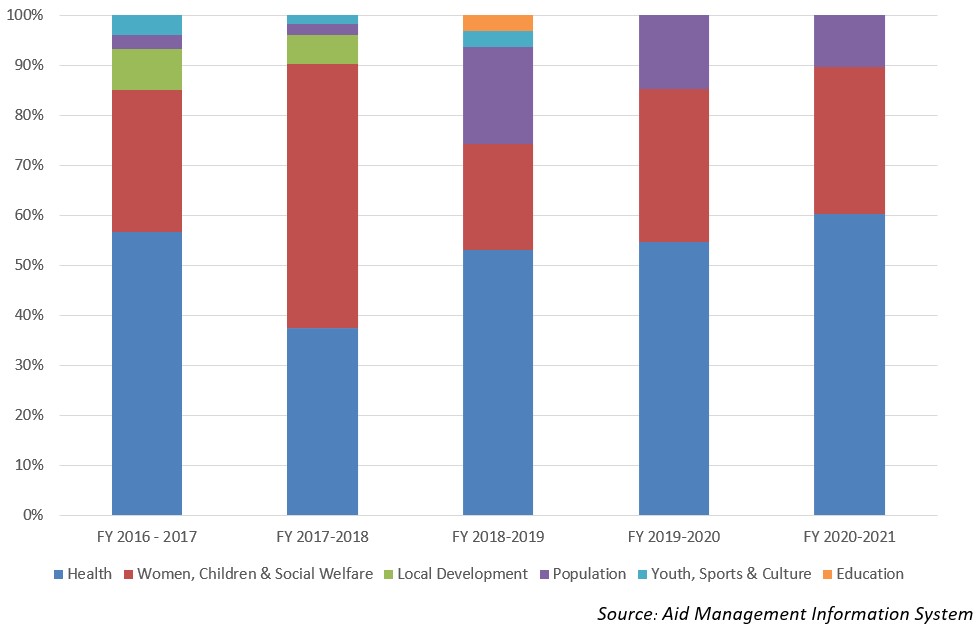 Over the period of five-year beginning from FY 2016/17 to FY 2020/21, UN Women’s Country Office in Nepal has disbursed US$ 5.2 million of ODA. The disbursement volume was highest with US$ 1.8 million in FY 2018/19. And the level of annual disbursement touched the lowest level in fiscal year 2017/18 with an amount of US$ 0.16 million. The average annual disbursement over the period stands at US $ 1 million during the last five year period.

The UN Women had agreed to provide a sum of US $ 7.5 million during the five year period through separate agreements with the government of Nepal. The highest level of annual commitment was made of US $ 2.2 million in fiscal year 2016/17 and the lowest level of commitment took place in 2019/20 at a level of US $ 0.33 million.

Guided by UN Charter, the UN Women country office, Nepal works for the elimination of discrimination against women and girls; empowerment of women; achievement of equality between women and men as partners and beneficiaries of development, human rights, humanitarian action and peace and security.

The UN Women office in Nepal will provide substantive support to UN bodies working in Nepal on all aspects of gender equality issues. It is guided by CEDAW, BPfA and MDGs. UN Women in Nepal, will focus on the following key areas: i) Violence against women ii) Peace and security iii) Leadership and Participation iv) Economic Empowerment and v) National planning and budget.

[3] The Convention on the Elimination of all Forms of Discrimination against Women (CEDAW) is an international treaty adopted in 1979 by the UN General Assembly. Described as an international bill of rights for women, it was instituted on 3 September 1981 and has been ratified by 189 states.