Nepal became the member of UNESCO in 1953 although its country office in Kathmandu was established in 1998. UNESCO aims to contribute to peace and security by promoting international collaboration through educational, scientific, and cultural reforms.  UNESCO advocates for education, building peace and fostering intercultural dialogue in Nepal.

United Nations Educational, Scientific and Cultural Organization (UNESCO) is a specialized agency of the United Nations formed on 16 November 1945. Its headquarters is in Paris, France. It is the successor of the League of Nations’ International Committee on Intellectual Cooperation (ICIC).[1]

UNESCO’s governance structure is led by two phases, the General Conference and the Executive Board. The General Conference consists of the representatives of UNESCO’s Member States. It meets every two years, and is attended by Member States and Associate Members, together with observers for non-Member States, intergovernmental organizations and non-governmental organizations. It also elects the Members of the Executive Board and appoints the Director-General for a 4 year term.

Nepal became a member of the UNESCO in 1953. In 1998 UNESCO established its country office for Nepal in Kathmandu. Since then, UNESCO Nepal has been supporting the Government of Nepal to attain quality education for all, mobilize scientific knowledge and science policy for sustainable development, preserve Nepal’s rich cultural heritage and promote cultural diversity.

Development cooperation ties between Nepal and UNESCO started in the 1950’s, though official assistance only began in 1979 with the project Financing Assistance for the Consolidation of Swoyambhu Temple in Kathmandu Valley with a cost of US$ 30,000. The most recent contribution from UNESCO was in Post-Earthquake Assistance for Emergency Operations and to Re-build the Capacity of Management Authorities for the Safeguarding of the Kathmandu Valley World Heritage Property.

There are projects being executed under the Participatory Programme (PP) via Nepal National Commission for UNESCO (NatCom), which is under the Ministry of Education. UNESCO Nepal works closely with the NatCom as a main counterpart. NatCom’s main function is to be involved in UNESCO’s activities in various ministerial departments, agencies, institutions, organizations and with individuals working for the advancement of education, sciences, culture, and communication and information in Nepal.

The followings are top five sectors of UNESCO Support during the last five year period: 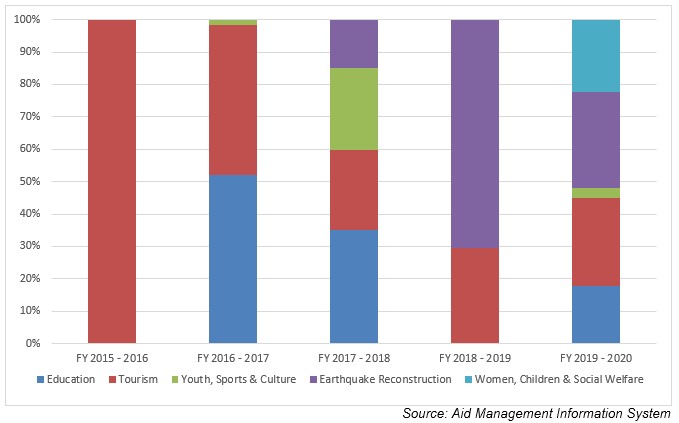 It works to attain quality education for all, focusing on women empowerment and literacy, to rehabilitate cultural heritage after the earthquake, promote cultural diversity and intercultural dialogue, to mobilize scientific knowledge, to promote press freedom, freedom of expression.

[1] An advisory organization for the League of Nations which had aimed to promote international exchange between scientists, researchers, teachers, artists and intellectuals; established in 1922.