In Nepal, UNFPA has been focusing on reproductive rights, maternal health and family planning since 1971. It envisages every pregnancy is wanted, every child birth is safe and every young person’s potential is fulfilled. UNFPA’s strategic plan (2018-2022), aims at ending preventable maternal deaths and unmet need for family planning.

UNFPA supports programs in more than 150 countries and areas spread across four geographic regions: Arab States and Europe, Asia and the Pacific, Latin America and the Caribbean, and sub-Saharan Africa. It is a member of the United Nations Development Fund and part of its Executive Committee.  The Executive Board ensures that the UNDP, UNFPA and the United Nations Office for Project Services (UNOPS) remain responsive to the evolving needs of program countries, and support the work of UNFPA.

UNFPA cooperation in Nepal began in 1971, and has evolved in response to the changing national context. Since the beginning, UNFPA has been working in close collaboration with the Government of Nepal in the areas of population dynamics, gender equality, reproductive rights, maternal health, and family planning.

UNFPA’s major goal is to achieve universal access to Sexual and Reproductive Health (SRH) services including family planning and to realize reproductive rights and reduce maternal mortality. Its mandate is guided by the Program of Action adopted at the International Conference on Population and Development.

With funding made available through the Australian Government’s Gender Equality Fund, the Department of Foreign Affair and Trade (DFAT) and UNFPA signed an agreement on 23 March 2016 providing US$ 385,000 grant for empowering girls in Nepal through life skills and comprehensive sexuality education. The beneficiaries are school age children, aged 5 to 16, attending public schools, as well as some participating in non-formal education.

The followings are the  top five sectors of UNFPA support: 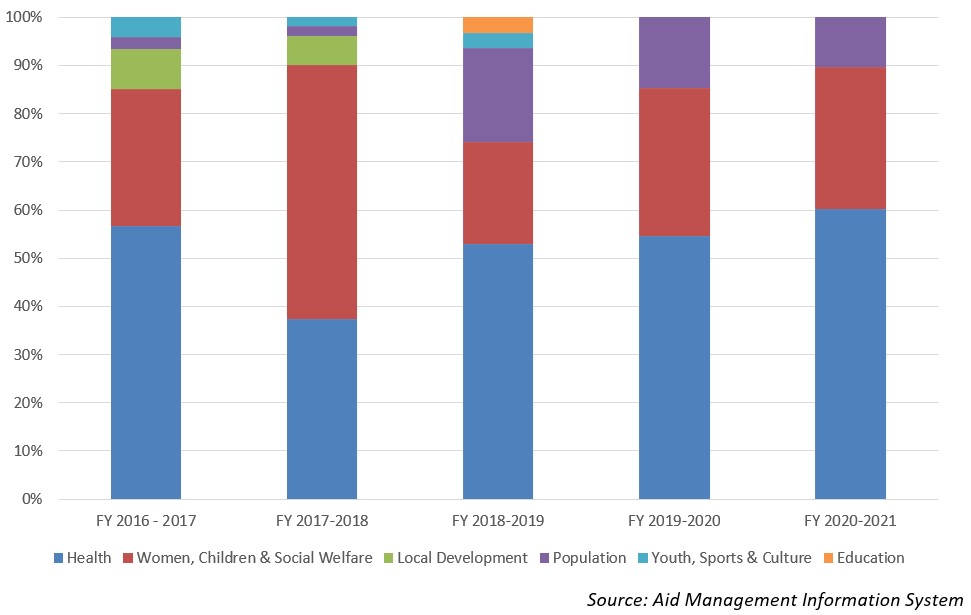 Over a period of five-year beginning from FY 2016/17 to FY 2020/21, Nepal has received total ODA disbursement of US$ 23.9 million from UNFPA. In FY 2020/21 the disbursement volume was recorded highest at US$ 6.6 million. Likewise, the lowest volume of disbursements took place in fiscal year 2017/18 at the level of US $ 3.0 million. The average annual disbursement during the five-year period stands at US $ 4.7 million.

UNFPA has agreed to provide US $ 26.6 million ODA support during the last five-year period through separate agreements with the government. The highest level of commitment was made in fiscal year 2019/20. However, there was no any agreement of support in fiscal year 2016/17.

UNFPA’s Country Programme is aligned with the Government’s national health sector strategies and plans, as well as with the UN Development Assistance Framework. UNFPA’s major contribution has been in the strengthening of national systems through, among others, development of policies, strategies, guidelines and protocols; equipment and supplies; capacity building and quality improvement in the health sector.

UNFPA’s new strategic plan (2018-2022), has focused on three transformative results: first, to end preventable maternal deaths, second to end unmet need for family planning and the third to end gender-based violence and harmful practices. The fourth outcomes areas stipulated in the Plan are: a. Sexual and reproductive health; b. Adolescents and youth c. Gender equality and women’s empowerment and d. Population dynamics. Altogether US $ 30.8 million is proposed as an indicative UNFPA assistance for this period.