UNDP has been working in Nepal from its in-country office since 1963 though the Standard Basic Assistance Agreement was signed in 1984. UNDP’s Strategic Plan (2022-2025) envisages helping 100 million people to escape from multidimensional poverty. The CPD (2018-2022) emphasizes skill building, climate change and sustainable natural resource management.

UNDP’s Strategic Plan 2018-2021 had focused on supporting countries to end extreme poverty, reduce inequality, and achieve the goals of the 2030 Agenda for Sustainable Development. The Plan intends to guide nations to be driven by their own choice of development and poverty eradication.

The Strategic Plan has stipulated 6 different signature solutions in realizing the SDGs, namely poverty and inequality, gender equality, energy, environment, resilience and governance. Likewise, 3 enablers are devised by the plan to scale up development impact for partner nations. They are: Digitalization, Strategic innovation and development financing.

The UNDP Executive Board is made up of representatives from 36 countries around the world who serve on a rotating basis. The Board oversees and supports the activities of UNDP, ensuring that the organization remains responsive to the evolving needs of program countries. UNDP is funded entirely by voluntary contributions from UN Member States, multilateral organizations, private sector and other sources.

UNDP has been working in Nepal since it opened an in-country office in 1963, just a few years before UNDP’s official establishment. The Government of Nepal and UNDP entered into a formal agreement, the Standard Basic Assistance Agreement, on 23 February 1984 to govern UNDP’s assistance to Nepal. Since then, UNDP’s support has helped government agencies, civil society and community groups to improve the lives of the Nepalese people.

UNDP Nepal’s work is closely linked with the priorities of both the Government and the United Nations system in Nepal. Much of the support has gone to building up the capacity of government agencies, civil society, and community groups to fight poverty and to bringing these groups and Nepal’s donors together to design and implement successful poverty alleviation projects.

In 2017, UNDP was able to train and orient 600 masons and carpenters and 25,000 people (about 40% women) on resilient and affordable housing models. Similarly, in 2016, UNDP successfully completed a climate adaptation project at one of the world’s highest places, in the Everest region. The project involved draining the Imja glacial lake, which was at the risk of bursting, by three meters through a sluice, making the lives of over 80,000 people downstream safer.

The followings are the top five sectors out of dozens of  UNDP support areas: 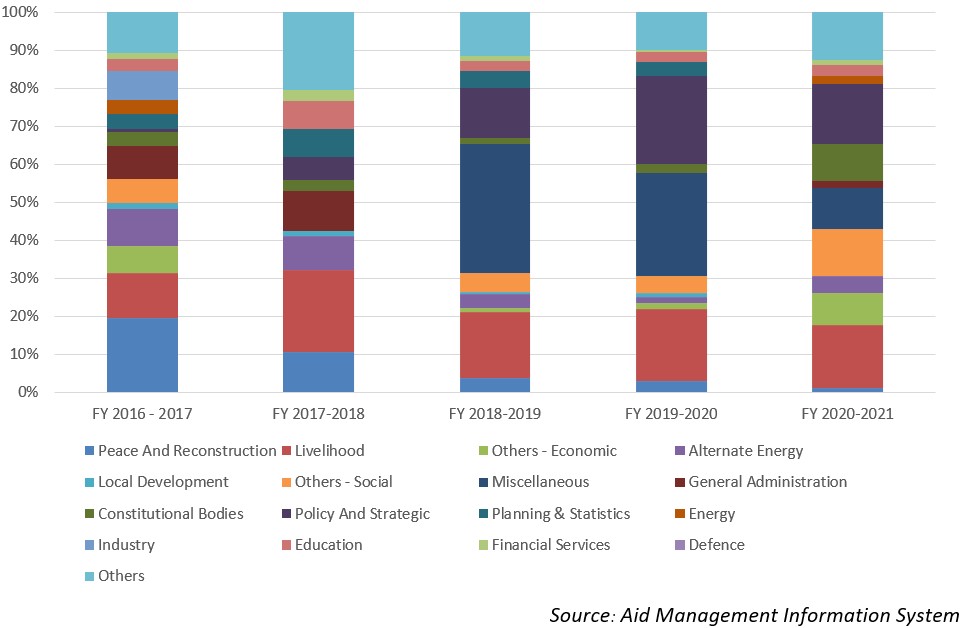 The present UNDP’s strategic engagement in Nepal is stated in its Country Programme Document (CPD), which covers the period 2018-2022. The CPD is aligned not only with the 2018-2022 UNDAF, but also with the SDGs and Nepal’s Fourteenth Development Plan. Three outcomes have been identified in the CPD.