UNICEF began its work in Nepal from 1964 though its liaison Office established in 1968. UNICEF was awarded Nobel Peace Prize in 1965 for its assistance to children and mothers in developing countries. The agreed CPAP (2018-2022) with UNICEF emphasizes health, nutrition, education, WASH and child protection.

The United Nations Children’s Fund (UNICEF) is a United Nations (UN) agency created by the General Assembly on 11 December 1946. At the time of establishment, its name was the United Nations International Children’s Emergency Fund and the objective was to provide emergency food and healthcare to children in countries that had been devastated by World War II.

UNICEF works with about 13,000 staff in over 190 countries and territories. Its headquarters is in New York. More than 200 country offices carry out UNICEF’s mission through programs developed with host governments. Seven regional offices provide technical assistance to country offices as needed. UNICEF’s office for the South Asian Region is based in Kathmandu. UNICEF works with national governments, non-governmental organizations, other UN agencies and private sector partners, to protect children and their rights.

UNICEF is dependent on contributions from governments and private donors. Governments contribute two-thirds of the organization’s resources. Most of the fundraising is done by UNICEF’s 36 National Committees, which are independent non-governmental organizations. The UNICEF Executive Board approves a total commitment for Regular Resources to support the program activities described in the Country Plan of Action (CPAP).

Direct programme expenses of UNICEF was US $ 5.7 billion as per the UNICEF Annual Report 2020. In 2020, in the face of the pandemic, UNICEF adapted its health programming to support the global COVID-19 response and to ensure continuation of essential lifesaving services. The areas of assistance were health, education, water, sanitation and hygiene (WASH), child protection, nutrition, social inclusion and HIV/AIDS.

UNICEF began its work in Nepal in 1964 under the administrative supervision of the United Nations Development Programme (UNDP) from its New Delhi office. UNICEF’s Liaison Office in Nepal was established in 1968, and an Office was opened in 1972 to support the Government’s efforts to provide basic services to Nepali children. The Basic Cooperation Agreement (BCA) was agreed on 21 February 1996.

Nepal served on UNICEF’s Executive Board during 1982–1985, 1992–1994, 2002–2004 and 2016-2018.  Election of Nepal in the Board was the opportunity to contribute to the work of the United Nations at the global level. Likewise, Ambassador and Permanent Representative of Nepal to the United Nations Mr Durga Prasad Bhattarai was unanimously elected as Vice-President to the Bureau of the Executive Board of UNICEF for 2016.

UNICEF has contributed to logistic support and immunization in the 1960’s and 1970’s and early childhood rights, education and protection in the 1980’s. UNICEF will support SSDP as a joint financing partner.

The following are the top five sectors of UNICEF cooperation: 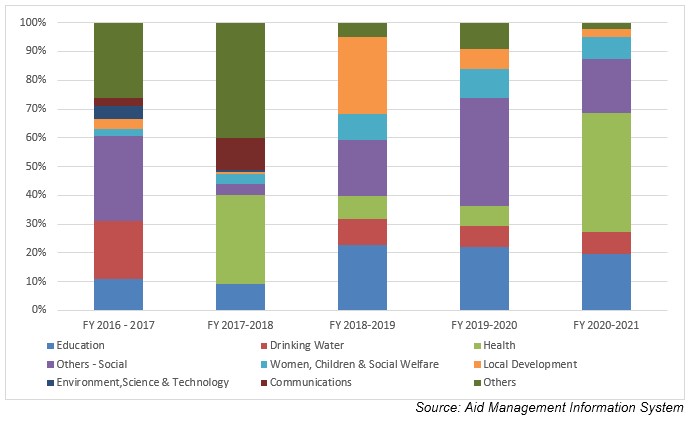 In 2017 UNICEF underwent a participatory exercise involving stakeholders at all levels to design a new country program, and in response to the new federal structure in the country. UNICEF’s programs for 2018-2022 have focused the areas of cooperation as per the particular exercise.

A budget of US $ 150 million is estimated as a requirement to carry out the Action Plan that covers all the components. UNICEF’s Executive Board has approved the total commitment for regular resources and has also authorized the executive director to seek additional funding to support the implementation of programmes specified in the CPAP.