Australia invested 90% of its bilateral and regional aid in Indo-Pacific region for promoting prosperity, reducing poverty, and enhancing stability in the world. Australia had included Nepal in its development cooperation program in 1979.

Nepal and Australia established diplomatic relations on 15 February 1960. Australia opened its residential Embassy in Kathmandu at the level of Chargé d’Affaires in 1984, which was subsequently upgraded to the Ambassadorial Level in 1986.

Nepal established its residential Embassy in Canberra in March 2007 which was formally inaugurated in September 2007. In addition, Nepal also has Honorary Consulates General/Consulates in Brisbane, Melbourne, Sydney, Perth and Adelaide.

On 20 May 2003, the Governments of Nepal (GoN) and Australia concluded a Memorandum of Understanding (MoU) on Development Cooperation. Australia maintains its Australian Embassy in Bansbari, Kathmandu.  HE Felicity Volk is the Ambassador to Nepal at present (November 2021).

In 2020 Nepal and Australia celebrated 60 years of diplomatic relationship based on long standing history and cordial support although Australia had included Nepal in its development cooperation program in 1979.

At that historical time, Nepal received assistance from Australia in areas of forestry, livestock development and manpower training. The MoU agreed in May 2003 between the GoN and the Government of Australia (GoA) provides strong grounds for cooperation in development programs in line with Nepal’s goals of economic development.

The top five sectors of Australian support to Nepal during the last five-year period are: 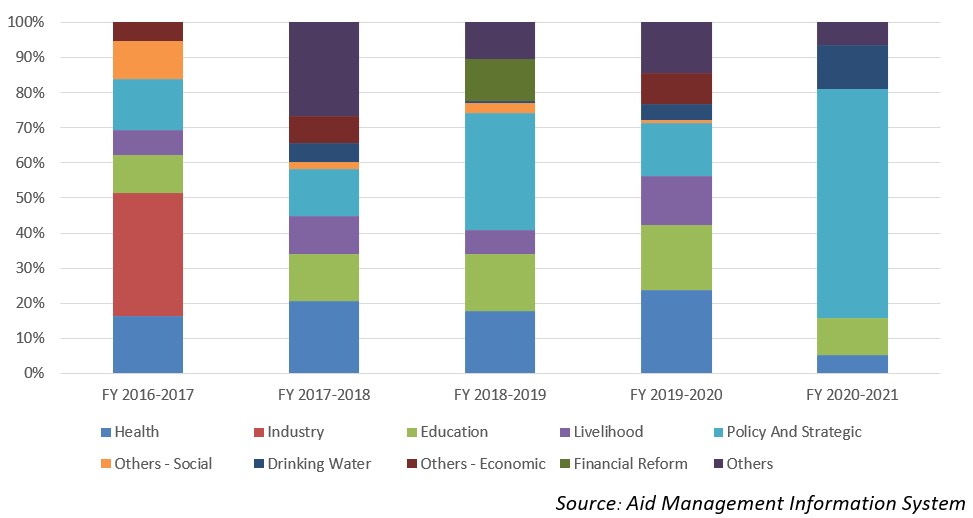 Over the last five-year period starting from FY 2016/17 to 2020/21, the Australian government has agreed to provide more than US$ 75.75 million. Similarly, it has disbursed US $ 73.55 million of ODA to Nepal in this period. However, there is not direct relationship between the year and the agreement amount the disbursement amount.

On 20 May 2003, the Governments of Nepal (GoN) and Australia concluded a Memorandum of Understanding (MoU) on Development Cooperation. Australia is committed to strengthening governance and enhancing emergency preparedness, with a focus on supporting local communities and those most vulnerable. Australian development programs in Nepal are focused on 3 pillars: health security, stability and economic recovery.