Norway is the second largest Development Assistance Committee (DAC) provider in terms of ODA as a percentage of GNI. Norway is one of the very high Human Development Index countries with 0.957 index value, ranking the nation first, out of 189 nations (HDR, 2020).

Norway and Nepal established diplomatic relations in 1973, although the ties between the two countries had started already in the early 1950’s. The Norwegian Embassy was opened in 2001 as the relations expanded, in particular through development cooperation.

Norway maintains its Embassy in Lalitpur, Nepal. Mr. Lasse Bjørn Johannessen is the Norwegian Ambassador to Nepal (August 2017 to date). The Nepali Ambassador in Copenhagen is concurrently accredited to Norway. Similarly, the Nepalese Honorary Consul General based in Oslo looks after the Nepalese interests in Norway.

Out of the total official development assistance to Nepal, approximately 75% is administered by the Norwegian Embassy in Kathmandu. The remaining 25% ODA is channeled directly from the Norwegian Ministry of Foreign Affairs and the Norwegian Agency for Development Cooperation (Norad).

Worth mentioning was also support to the Energize Nepal Project with a special link between Kathmandu University and Norwegian University of Science and Technology (NTNU), with a grant of NOK 25 million (over 5 years).  Norway is supporting the regional intergovernmental learning and knowledge center- International Centre for Integrated Mountain Development (ICIMOD), with a budget of NOK 150 million over the 5 years.

Major Support of Norway to Nepal by Sector

The followings are the 5 major support sectors of the Norwegian cooperation during the last five – year period. 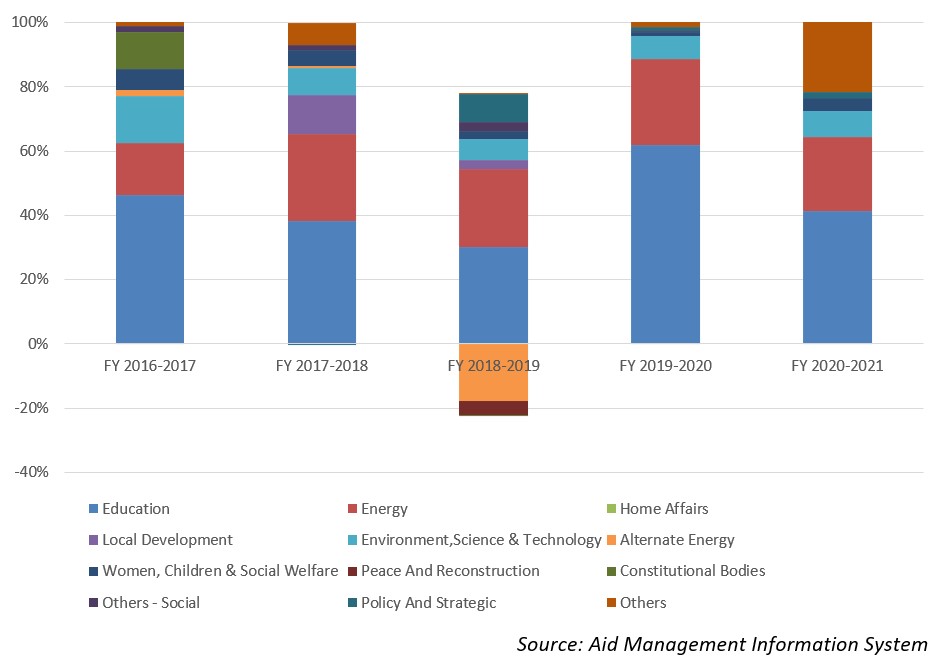 During the five-year period Norway agreed to provide US $ 364.5 million to Nepal through separate agreements. The highest level of bilateral cooperation agreement was concluded in fiscal year 2019/20, in an amount of US $231.5 million. However, there is not direct relationship between the year and agreement amount and the amount jof disbursement. But it is true that all the disbursement are the outcome of past aid commitment.

Norway has worked closely with other donors to reach the targets for the education program School Sector Reform Program (SSRP) since 2009, and is particularly committed to increasing access to education for girls and children with disabilities.

Norway is a long-time supporter for energy development in Nepal. The main energy support has to date been channeled through ADB, by a grant of NOK 330 million for the Electricity Transmission Expansion and Supply Improvement Project and the South Asia Sub-regional Economic Cooperation (SASEC) Power Expansion Project-Transmission Line in Nepal.

Khimti I Hydropower Plant is Norway’s largest private initiative in Nepal. The plant is built with private sector funding as a “BOOT” agreement (Build, Own, Operate, and Transfer) with GoN.