Switzerland has one of the most competitive economies with one of the highest gross domestic product (GDP) per capita in the world.  It has also a long tradition of international assistance, especially in humanitarian aid.

Switzerland and Nepal established diplomatic relations in 1956. On the occasion of 50 years of development cooperation between the countries, the Government of Switzerland opened its Embassy in Nepal in 2009. Similarly, Nepal also opened its residential Embassy in Geneva, Switzerland. At present, Ms Elisabeth von Capeller is Swiss Ambassador to Nepal (November 2021).

The first cooperation initiative was in the field of cheese and diary development from 1956-1964. The construction of the Lamosanghu-Jiri Road, during 1974-1985 facilitated the transfer of knowledge of mountain road construction acquired over long experience in the Swiss Alps.

Since 1963 Nepal has been a priority country for Swiss development cooperation. Switzerland works closely with local authorities, other donors, and international organizations in Nepal. Its key partners include Helvetas Swiss Inter-cooperation, AF-ITECO AG, Swiss Contact.

Switzerland also works with multilateral organizations such as the World Bank, the Asian Development Bank and the International Centre for Integrated Mountain Development (ICIMOD). In the aftermath of catastrophic earthquake of 2015, the Swiss Humanitarian Aid in coordination with development cooperation actively supported the Government of Nepal

The followings are the top five sectors of Swill development cooperation in Nepal during the last five-year period. 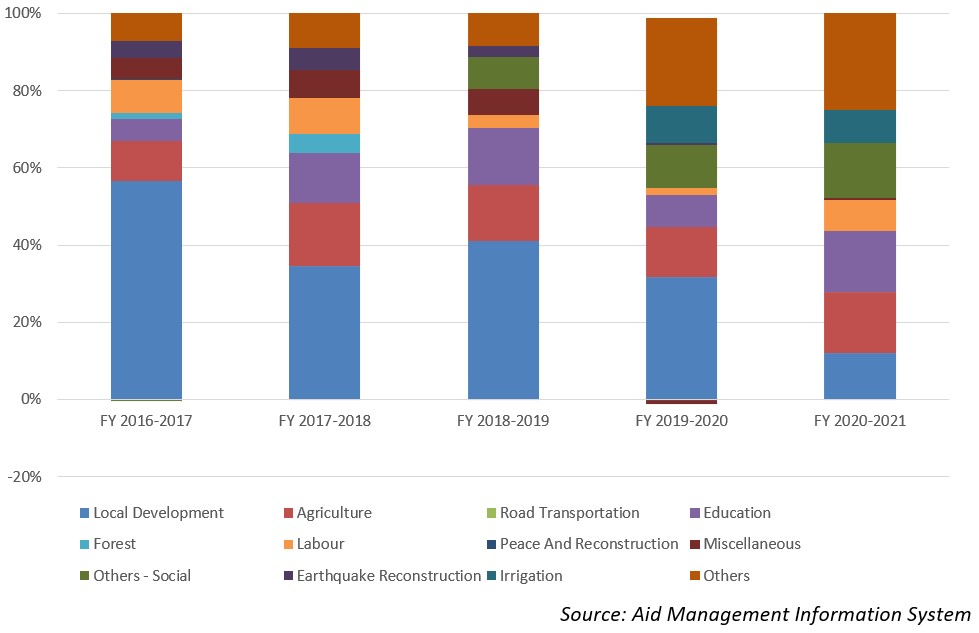 The Swiss cooperation strategy Nepal (2018-2021) has stipulated the objectives that women and men benefit from equitable socio-economic development and exercise their rights and responsibilities in an inclusive federal state. The Swiss government has earmarked CHF 130 million (equivalent to Rs. 14.7 billion) of disbursement during the four year period.

The areas of Swill involvement to achieve the overall goals are: i) all people at subnational level build an inclusive and accountable federal state, ii) the women and men, especially from disadvantaged groups, find employment and increase their income and iii) the migrants and their families are better protected by democratic institutions in Nepal and benefit from decent work conditions abroad.