Finland’s international Development Policy aims to support developing countries’ efforts to eradicate poverty and inequality. Nepal was among one of the ten biggest partner countries as a recipient of the funds in 2016.

Nepal and Finland established diplomatic relations on 21 September 1974. The Finnish Embassy was opened in Kathmandu at the Chargé d’Affaires level in 1992. The Embassy was upgraded with the appointment of its Ambassador from September 2011.

Nepal has no residential Embassy in Helsinki. The Nepalese Embassy in Copenhagen is concurrently accredited to Finland. At present Mr. Pertti Anttinen is Finland’s Ambassador to Nepal (November 2021).

Finnish cooperation with Nepal commenced in 1982 with grant assistance of 6,000 MT of chemical fertilizers. Presently Nepal is one of Finland’s primary long-term development partner countries.

The Finnish development program in Nepal focused mainly on energy, forestry and water resources. Nepal has also received assistance from Finland for the detailed engineering design of the Kali Gandaki Hydropower Project, rural electrification, and the multi-fuel diesel plant.

According to the Country Strategy for Development Cooperation Nepal 2016-2019, Finland’s focus of support to Nepal is on access to clean drinking water and sanitation, developing education, and improving the influence of women and other vulnerable groups.

More recently, Finnish development cooperation has shifted towards a focus on alleviation of poverty, environmentally sustainable development, disaster risk reduction, and the promotion of democracy, human rights and a participatory system of governance.

Major sectors of economy supported by the Finnish aid during the last five years are: 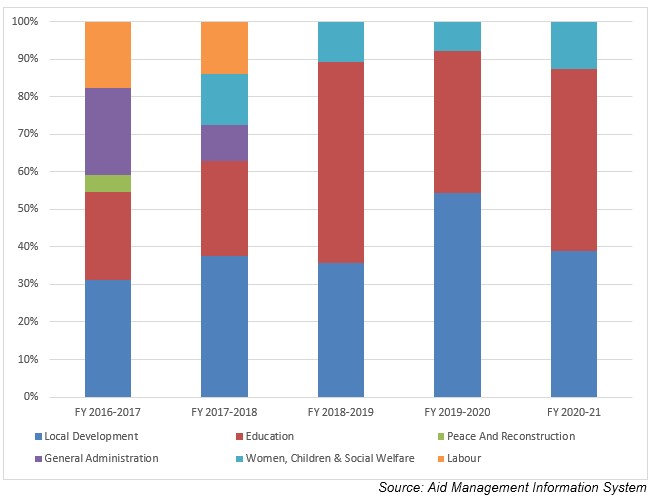 Local development is one of the highest priority sectors of cooperation during the decade followed by the education sector. Finland’s contribution to RWSSP-WN II is 13.7 million euros for 2013-2019.

RVWRMP III (2016-2022) covers 10 districts in Provinces 6 and 7, aims to achieve universal access to basic WASH services, and improved livelihoods with the establishment of functional planning and implementation frameworks for all water users and livelihoods promotion in the project area.