The German economy is the largest in Europe and the fifth largest in the world. It is one of the top 5 countries in the world in terms of providing the highest amount of ODA (in absolute terms) in 2020.

Diplomatic relations between the Government of Nepal and the Federal Republic of Germany were established in 1958. Germany has been maintaining an Embassy in Kathmandu since 1963.  Dr. Thomas Prinz is the current German Ambassador to Nepal (November 2021). Similarly, Nepal has also maintained its Embassy in Berlin, Germany.

Nepal is an important partner country of German Development Cooperation. Over 50 years, Germany has contributed to the improvement of the lives of the Nepali people with support to the country’s political, economic, environmental and social development.

Since the commencement of bilateral development cooperation in 1961, a total of Euros 1.1 billion (US$ 1.3 billion) has been committed for bilateral projects. On behalf of BMZ, FC through KfW started in 1963, and TC through GIZ has been active since 1975, before the opening of its office in Kathmandu in 1979.

The priority areas of Nepal-German cooperation are sustainable economic development and trade, renewable energy and energy efficiency, and health. BMZ pursues a biennial commitment cycle in Nepal and allocates the amount of assistance accordingly. Furthermore, annual consultation and negotiation has remained as a Nepal-Germany joint mechanism for development cooperation.

Major Support of Germany to Nepal by Sector

The followings are the top five areas of German support to Nepal in the last five year period. 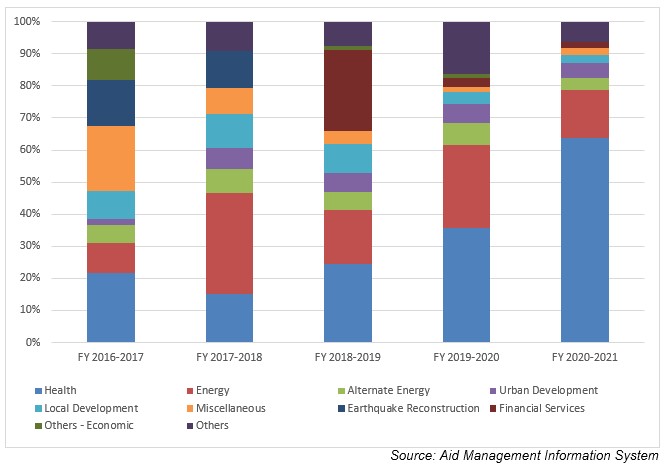 In the last five year, German government has agreed to provide a sum of US $ 142.5 million to Nepal. The highest level of support commitment was made through the agreement made in fiscal year 2017/18. However, there is no direct relationship between the year of agreement, agreement amount and disbursed amount though disbursements are based on the agreed amount.

Health and the energy sectors are the top priority sector of cooperation of the German Government. Financial and Technical support to the Health Sector SWAp is on-going. Since 2007, Physikalisch Technische Bundesanstalt (PTB) has been active in Nepal.

The Energizing Development (TC) Project works to promote sustainable access to grid electrification under community management and ownership in rural areas as well as access to credit financing for off-grid micro hydropower development.

In addition, the German Embassy runs a small-scale project fund to various institutions and groups in Nepal. The Senior Expert Services (SES) supports projects with highly qualified retired experts who come to Nepal on short-term missions for voluntary activities.