India has emerged as one of the fastest growing major economies in the world. It has transformed itself into a provider of development aid with a global development cooperation approach.

Diplomatic ties between India and Nepal were established on 13 June 1947 and subsequently, in December 1947 India established its Embassy in Nepal.

The 1950 India-Nepal Treaty of Peace and Friendship compels both nations to acknowledge and respect the complete sovereignty, territorial integrity and independence of each other.

India maintains its Embassy at Lainchour, Kathmandu and Nepal has its Embassy in New Delhi. At present Mr. Vinay Mohan Kwatra is the 25th Ambassador to Nepal (November 2021).

Since the 1950’s, India has been assisting Nepal in its quest for prosperity and economic development. India’s initial assistance was channeled through the India Aid Mission, which was established in 1954 to support development projects across Nepal.

Other large projects, such as Koshi Barrage (1963), Devighat Hydropower and Irrigation Project (1983), and Bir Hospital in Kathmandu (1984) were also the key part of Indian assistance to its neighbor.

The followings are the top five sectors of the Indian support to Nepal during the last five year. 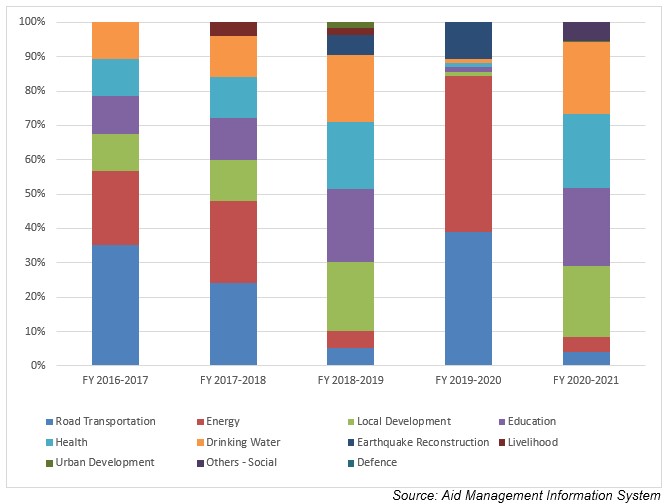 During the last five year period Indian committed to provide US $ 294.7 million through separate agreements. In this course, the highest level of aid commitment, US $ 78.3 million, was made in fiscal year 2017/18. There is not direct relationship between the year of the agreement amount and year and disbursed amount though disbursement are made out of agreed amount.

The Government of India has been supporting construction of Postal Highway, Optical Fibre Network, railway links, Integrated Check Posts and transmission lines at different locations near the border of the two countries.

Recognizing the historical and cultural relations between the two countries, India is supporting in the improvement of infrastructure and facilities at major pilgrimage and heritage sites such as Pashupatinath, Muktinath and Janakpur.

Government of India has been providing ambulances since 1994 to various districts of Nepal. In addition, it provides school buses to various health and educational institutions to facilitate the movement of teachers, students, doctors and nurses.