Since 2020, the Republic of Korea (South Korea) became the 10th strongest economy in terms of GDP in the current price. Its journey from a poor to a developed country and from the recipient to donor country is seen as a successful development example.

The Republic of Korea and Nepal established diplomatic relations on 15 May 1974. Agreements on Korean Youth Volunteers in January 1992 and the Economic Development Cooperation Fund (EDCF in September 1997 were the vital to enhance bilateral economic cooperation.

In 2007 the Nepalese and South Korean governments signed a MoU on the Employment Permit System (EPS) for recruiting Nepalese workers according to Korean labor laws.  Korea has been maintaining the Embassy of the Republic of Korea in Kathmandu since 1974. Mr. Park Chong-Suk is the present Ambassador of the Republic of Korea to Nepal (November 2021)

From 1978 to 1995, KOICA focused on developing sericulture in Nepal by implementing the Sericulture Development Project and constructing a Khopasi Sericulture Center. The Government of Korea conducted a feasibility study for the Modi Khola Hydroelectric Project (1993-1994), eventually provided a soft loan to the project in 1997.

In 1999, with the financial and technical support from KOICA, the Korea-Nepal Friendship Hospital was established in Bhaktapur to provide access to quality health services to the people of Bhaktapur and adjoining districts.

The Agreements on the Avoidance of Double Taxation and the Prevention of Fiscal Evasion in October 2001, the Air Services Agreement in March 2005, and the Culture Agreement in April 2005 are remarkable.

Each year KOICA invites more than 100 government officials from Nepal to Korea in order to improve their capacities in a number of fields.

The following are the top five major sectors that received Korean support during the last five-year period. 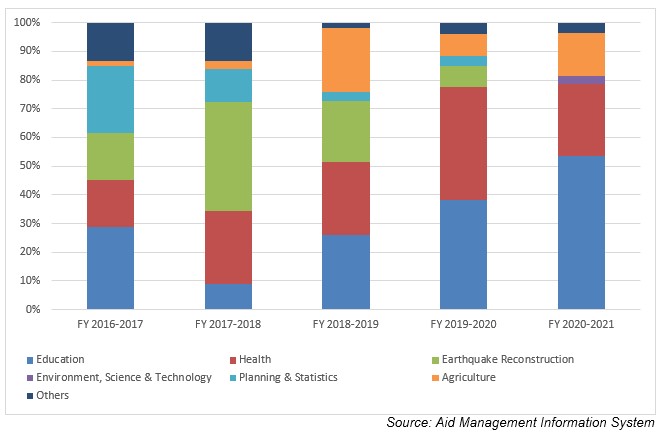 During the last five-year period the Korean Government has agreed to provide a total of US $ 46.4 million through separate agreements. The highest level of aid commitment was of US $ 19 million signed in fiscal year 2016/17.

KOICA’s Country Partnership Strategy for Nepal 2020-2024 states that the Government of Korea aims to contribute to poverty reduction and economic growth. It also advocates for Nepal’s graduation from Least Developed Country (LDC) status to Middle Income Country status by creating a foundation for fostering competitive future generations that can create social values.

KOICA is implementing Integrated Rural Development of Nepal through Strengthening Research and Development Capacity of Kathmandu University (2017-2023), Empowering Rural Communities In Nepal through an Integrated Approach to Health and Income Growth (2020-2025), Capacity Building for TVET Model Institute in Province 2 Leading to Cultivate Skilled Workforce in Construction Sector (2021-2026), Establishment of Cyber Bureau with Capacity Building for Nepal Police Establishment of Cyber Bureau with Capacity Building for Nepal Police (2021- 2026) and Project for Strengthening Stage-Wise Support System for The Stable Reintegration of Korea Returnee Migrants in Nepal (2022-2028). Similarly Dispatch of Korean Volunteer and Capacity Building Program are other two prominent technical assistance to Nepal   which KOICA has been implementing since a long time. More than 400 Korean Nationals has worked in Nepal as a volunteer, transferring knowledge, exchanging culture and Korean know how various development sectors. At the same time more than 1900 government officials have participated in various capacity building program in Korea.