Nepal and Japan established diplomatic relations in 1956. In 1968, the Embassy of Japan was established and in 1978, the Japan International Cooperation Agency (JICA) office was opened in Nepal. Since 1969, Japan has been supporting Nepal for social and economic development activities.

Japan maintains an Embassy in Kathmandu. Mr. Masamichi Maigo is the Ambassador to Nepal at present (December 2021). Nepal has an embassy in Tokyo, Japan with two consulate offices in Fukuoka and Osaka.

During the period of 1980-1994, Japan also provided assistance to establish and expand the Tribhuvan University Teaching Hospital, the Water-Induced Disaster Prevention Technical Center and the Kanti Children’s Hospital.

The followings are the major five sectors where Japan used to support over the last five year period. 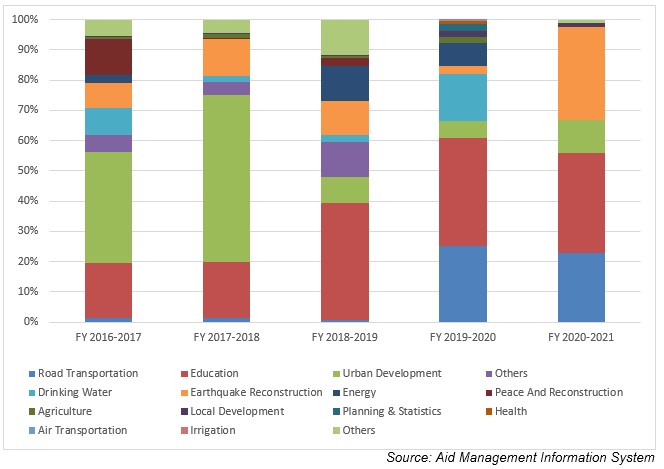 During this period Japan government agreed to provide a sum of US $ 282.5 million to Nepal. The highest level of aid commitment stands at US $ 219.9 million in fiscal year 2016/17. Likewise, the lowest level of aid agreement was made of an amount of US $ 2.8 million in 2020/21. Though the amount disbursed is solely out of the committed amount, there is no direct relationship between the year, agreed amount and the disbursed amount.

Japanese development cooperation strategy for Nepal rests on: Infrastructure and institutional development for sustainable economic growth, Consolidation of peace and steady transition to a democratic state and rural poverty reduction.

Japan has an ODA policy entitled ‘Country Development Cooperation Policy’ to guide its cooperation to Nepal. The major objective is to provide assistance for balanced and sustainable economic growth, focusing on Nepal’s graduation from LDC status. The priority areas (medium-term targets) are: (1) Recovery work and disaster resilient nation-building in both structural and non-structural aspects, (2) Social and economic structure and mechanism development which directly lead to economic growth and the national livelihoods improvement, (3) Poverty reduction and quality of life improvement and (4) Governance enhancement and basic framework development for democracy.